Tapiku manor is first mentioned during the second half of the 17th century. At the end of the 18th century and in the beginning on the 19th, the manor belonged to family Pistohlkors. From the 1820s to 1919, family von Wahl owned the house. The last owner was Axel von Wahl. Afterwards, Pajusi municipality bought the manor from the state, its was renovated and in the autumn of 1926, Tapiku school (4 grades) started operating in the new house. The school was closed in 1947 due to the lack of students. 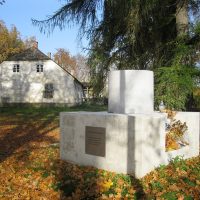