This memorial statue is located in Ppõltsamaa town center and is dedicated to those people, who fell in the War of Independence during 1918-1920. The main element of the statue is a soldier, who leans on his sword and shield. The monument was designed by Voldemar Mellik and was opened on the 17th of August 1924. In October 1930, the soldier was torn down and the statue was destoryed. The monument was re-opened on the 12th of August 1989. Nowadays, the statue is made from dolomite.

Neraby, you will find a memorial place dedicated to those, who perished on ferryboat Estonia. 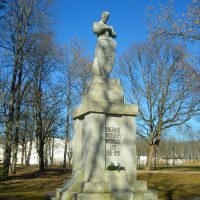